Each year, IUPUC honors its community partners for their outstanding accomplishments in enriching the educations of IUPUC students and service to the greater Columbus community.

Recipients may be individuals, married couples, business enterprises, or civic groups. Please explore these links for more information, including nomination criteria and eligibility.

The Distinguished Alumnus Award is presented at the annual Circle of Leadership Celebration to an IUPUC alumnus who has made outstanding professional contributions, accomplishments, and service to the community and to IUPUC.

You are invited to submit nominations. The nomination deadline is June 30. Nominations can be e-mailed to bvogel9@iupuc.edu, faxed to 812.314.8503, or sent via U.S. mail to Indiana University-Purdue University Columbus (IUPUC) Alumni Association, 4601 Central Avenue, Columbus, IN 47203.

The Excellence in Diversity Award at IUPUC recognizes and honors demonstrated commitment and outstanding efforts toward creating a diverse and inclusive community.

Each year, IUPUC recognizes one campus initiative and one community initiative that meet the defined criteria. Recipients can be individuals, organization, groups, units, projects, or institutions.

The award is presented each January during the university’s Dr. Martin Luther King Jr. celebration.

Nominations for the  Excellence in Diversity Award are due each November.

Edna Folger set the early standard for teachers. In her honor, the award was designed to raise awareness about the immeasurable influence teachers have on their students and to recognize the image of teachers as important community role models. Sponsored by Faurecia, the award includes a stipend, a personal award from the IUPUC Center for Teaching and Learning, and the recipient’s name will be added to a permanent plaque located in the Columbus Learning Center. Any full-time elementary or secondary school teacher working at a public, private, or parochial school in Bartholomew County is eligible to receive the annual award.

Contact the Marsha VanNahmen at the IUPUC Center for Teaching and Learning for complete details, including nomination instructions and due dates.

In general, nominations should include why the nominee has gone above and beyond the expectations of a good teacher based on his or her:

Karen Nading, Columbus East High School and C4 - Columbus Area Career Connection, received the 2019 Edna Folger Outstanding Teacher Award. Nading has taught family and consumer science for more than 43 years. She is sponsor for the Family, Career, and Community Leaders of America (FCCLA) chapter at CEHS, which is one of the largest of its kind in the state of Indiana. FCCLA focuses on leadership development and community service, and the CEHS chapter has received recognition at both the state and national levels.

Through engaging instructional approaches and a personal connection with her students, Nading encourages students to achieve their educational goals and full potential. She has been instrumental in helping develop new curriculum and statewide career and technical education pathways. Ms. Nading was a pioneer opening doors for diverse and non-traditional students to learn about nutrition and wellness in an active learning environment.

Nading has a keen eye for spotting promising future educators. This is evident by the number of FACS teachers all over Indiana who credit Nading’s influence and encouragement in their career choice. She mentors these emerging educators as well as her peers and colleagues in other subject areas.

Nading is active in her local church and encouraging the next generation of church leaders and “doers”. Nading also supports 4-H in Bartholomew County, and has taught a Sewing Camp for over 15 years.

The MBA Community Partner Award recognizes those organizations and individuals who have been exceptionally engaged with the Indiana University MBA program in Columbus and with IUPUC as a university.

It makes public our appreciation for exceptional support of, and contribution to, the vision of graduate business education that drives the MBA program at IUPUC. 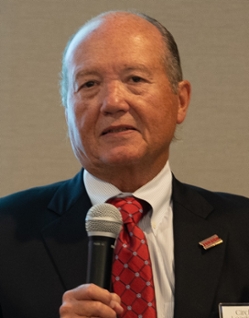